You are here: Home / The Middle Ages / Today the US Constitution gives a “H/T” to the Magna Carta 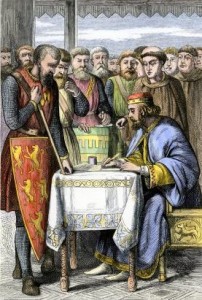 I couldn’t let today’s 800th anniversary of the signing of the Magna Carta come and go without saying anything.  For it was on this date – June 15, 1215, at exactly 12:15 p.m. at Runnymede that the Magna Carta was signed (ok – j/k about the exact time of day).   It’s typically cited as a cornerstone in our modern political systems in the West, though the exact degree to which that is true is unclear to me.  If the U.S. Constitution were a blogger, it might as well give a hat tip out to the Magna Carta.

Now, I kind of shake my head when I hear of contemporary celebrations or commemorations of historical events because of my disgust with the way many people think today in general.  I wouldn’t be surprise if some historian were to uncover evidence that King John or the barons involved in the Magna Carta were racists, people would be up in arms on Twitter and in the mainstream media about commemorating such an event.  Or, the commemoration could very well include some type of denouncement of racism.  It seems that politically correct judgments are so loud these days that they drain out so much else.  Since history is inevitably filled with politically incorrect material (according to today’s popular standards), celebrating anything historical is grounds for stepping on the soapbox of judgment.

In any case, I’ll step down from my own soapbox for a moment to highlight a few of the threads here which refer to the Magna Carta in some way.