Cadaver experiments and the rise of Mary Shelley’s Frankenstein

You are here: Home / Victorian Era / Cadaver experiments and the rise of Mary Shelley’s Frankenstein

There was a program on the History Channel program about the origins of Frankenstein and the inspiration for Mary Shelley, who was only in her teens at the time she wrote her famous book in 1815 (published 1818).

Frankenstein presented a timeless classic of a doctor who creates a person with sewn-together body parts and brings it to life with and electric charge.  The show explained that in the late 1700s, a (French?) doctor/scientist published his findings that by inserting an electrically-charged rod in a particular spot in a dead frog, the frog would move its leg like it was alive.  After this, other people began to experiment on a variety of animals, and eventually on humans. 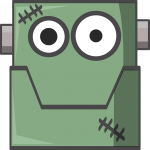 A Scottish scientist was said to have acquired the body of a man who had just been executed around the time Mary Shelley wrote her book.  With a small crowd of people observing him, he inserted metal rods at various points in the body and made it react and move, as if the dead man were still alive.  As it was explained, Mary Shelley came up with her idea for her horror novel against this backdrop; mankind began to engage in the exploration of the “life force” behind living things in an attempt to find its meanings and/or secrets.

The human may have been considered a kind of “machine”, just as those that were beginning to power industries during this age.  It was in a time when science began to know just enough to realize that wonders lay within man’s grasp, but not enough to know what kinds of results these might bring.

This post was based on a discussion topic originally posted October 27, 2006.