I was looking for reaction to Charles Dickens’ A Christmas Carol from his contemporaries when I came upon a collection of the author’s other Christmas works.  The work, Household Words: Christmas Stories, 1851-1858, was a compilation of short stories and reflections that Dickens had authored over the years.  Among them are stories such as “What Christmas is as we Grow Older”, “An Idyl for Christmas In-doors”, and “The Orphan’s Dream of Christmas”.

The last story, however, is what caught my attention: “The Round Game of the Christmas Bowl”.  Intriguing.  What could be grander than reviving a forgotten Victorian game for Christmas of the present age?  Could this be a game of strategy, or a game of skill, or a game of chance?  Even if it was not as sophisticated as modern games, its richness in cultural tradition could give it a tremendous amount of value in our world today.  Or so might one think at first glance.

The Pool of the game is a capacious circular bowl, or basin, made of ice. It is some sixty or seventy feet in circumference, and all round the rim there is stuck a hedge of holly- boughs, in full berry, interspersed with coloured lamps and silver bells.

This is a different type of game – and outdoor game – and it would need some planning to do.  I pictured this as a type of round, frozen pond – manmade or natural – surrounded by a short wall of lovely Yuletide decor.  It’s interesting that the decorations that are listed, such as garland, silver bells, and colored lighting, are all very popular Christmas decorations 175 years later.  As for the size of the pool, it would be challenging to find such a space, but it could be done.  But how do you actually play the game?

The next step that Mr. Dickens mentioned about how the pool is used gave me pause:

Everybody who is inspired by Christmas festivities comes to put into the Pool. He is to put in some thing which is his pride. In doing this he generally throws in something which is equally his trouble; and thus, by doing a generous act at Christmas, in throwing awav his pride, he at the same time gets rid of one of his worst troubles.

Hmm.  What’s all this about “putting” intangible items into the pool?  All of a sudden, Dickens lost me.  What started out as an actual game morphed into something metaphorical and dreamlike.  In other words, not an actual game.

Continuing the story, Dickens penned a long poem or song that can be recited (or sung?), possibly around the pool, which gave some clues about what it all means.

Here is the first verse:

Here is a Pool, all made of ice,
For a great round Christmas Game !
Its rim is set with green holly boughs,
And lamps of colour’d flame ;
With silver bells that tinkle and gingle
As each one bis offering comes to mingle, —
Whether ingot of gold, or a grey sea shingle.
Who comes first? — ‘Tis the King, I declare,
With the crown in his hand, and the frost in his hair !
Close to the Pool he brings his crown,
And tosses it o’er the holly !
So, away to the bottom goes all his pride,
And his royal melancholy ;
While gingle ! tinkle ! gingle !
How the sweet bells ring !
And round about the lighted Pool
We gambol, dance, and sing !

The image of all of this starts to get clearer.  At the top of the social ladder is the king, who casts his crown off his head, tosses it over the decorated wall of holly, and into the frozen pool.  The purpose of this is evidently to cast off what figuratively weighs him down in life and creates his “royal melancholy”.  The effect is joy, dancing, singing(!).  Amazing.  I had to look up a word in the last line, gambol, which means “to run and jump in a happy way”.

The verses then continue with other people throwing things, representative of the causes of strife in their lives, over the wall.  The Minister of State throws his “Puzzle made of weights and wheels” into the pool.  A bishop throws a bale representing his “pain and pride Of Church and State’s mis-marriage”.  A soldier does away with his necklace and sword, thereby giving up “blind obedience”.  A lawyer gives up his “bill of costs”, a merchant does away with his “bargain”, the scholar tosses his book, and even the lover gets rid of his mistress.  All this stuff is cast onto the icy surface.

A final verse from Dickens’ rhyme:

All these into the Pool
Are cast, with various smarts,
As valued Christmas Offerings,
Inspired with Christmas hearts !
While gingle ! tinkle ! gingle !
How Vie sweet bells ring !
And round about the lighted Pool
We gambol, dance, and sing !

As a metaphorical Christmas moral tale, I can understand and appreciate this.  But what I don’t get as much is how Dickens concludes the description of how the Round Game of the Christmas bowl ends:

The crowd of players at the Game, having joined hands in this concluding dance, now whirl round the Pool of Ice, gambolling and singing ; and they continue to do this, till the charm begins to work, and the heat of the Christmas hearts outside causes the Offering which each has thrown in, to warm to such a genial glow, that the heat thus collectively generated, melts the ice. The Pool gradually dissolves — the players of the game, one after another, sink down exhausted, and fall into a delightful reverie, ; while the melted Pool over flows, and floats every one of them to his home, as he seems to lie in a mother-of-pearl boat, with a branch of holly at the prow, and a coloured lamp amidst the green leaves and red berries. Each one, soon after, recovers his senses just enough to find himself lying comfortably in bed, and listening to tho waits !

Seriously – the game ends when the ice bowl melts due to all the good vibes and overflows, carrying each person home?  And then ends up in bed?  What is up with this story?

It’s a surreal ending for sure, and kind of sappy.  Dickens has truly unleashed his Romantic Age spirit without holding back.  Perhaps this is similar to how we’re supposed to understand Scrooge when waking up in his bed on Christmas morning: awestruck, dumbfounded, overcome with a happiness that might make him want to gambol.

But it’s still a little strange.  I’m not sure I’ll be asking family or friends to play this game come Christmastime.

Some time ago I began to understand and appreciate the impact that Victorian culture has had on certain holiday traditions. 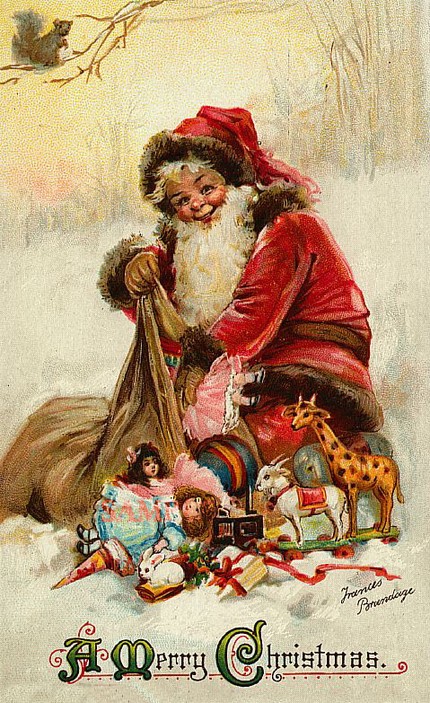 The Victorians instilled an idea of familial happiness that was created through playing of quaint games and creating traditions that could be enjoyed in the middle and upper classes.  These turned out to be so successful that people in our own age continue these practices. In fact, we may have quite a few Christmas traditions that we can thank the Victorians for, such as the singing of Christmas carols (or the revival thereof), the giving of gifts, evergreen decorating, St. Nicholas (in popular culture), and the giving of Christmas cards.  In Britain in 1840, postcards were put up for sale for a penny, which made it easier for the tradition of Christmas card sending to be born.  In 1876 the price of a stamp was decreased to a half-penny.  In the United States, Louis Prang became known as the “Father of the American Christmas Card”, selling five million of them annually by 1881.

One of the most important figures in the Victorian revival of Christmas was Charles Dickens.  Prior to Dickens’ time, Christmas had become identified with alcoholic excess and led to the prohibition of the holiday by Puritans when they arrived on the shores of America.  The ban on Christmas continued well into the nineteenth century; the London Times did not even mention the holiday from 1790 to 1835 – forty five years without a Christmas mention!

The lukewarmness over the holiday during this time can be witnessed in what the Manchester Courier wrote in December of 1828.  Perhaps trying to kindle the fire of interest in Christmas after the publication of Christmas poems, it commented:

We hope that our author’s spirited attempt to revive the dormant enthusiasm with which our forefathers celebrated these ancient customs and festivals, which were older still than they, will not be altogether unsuccessful.  Mr Moxon’s publication would make a very suitable Christmas gift. 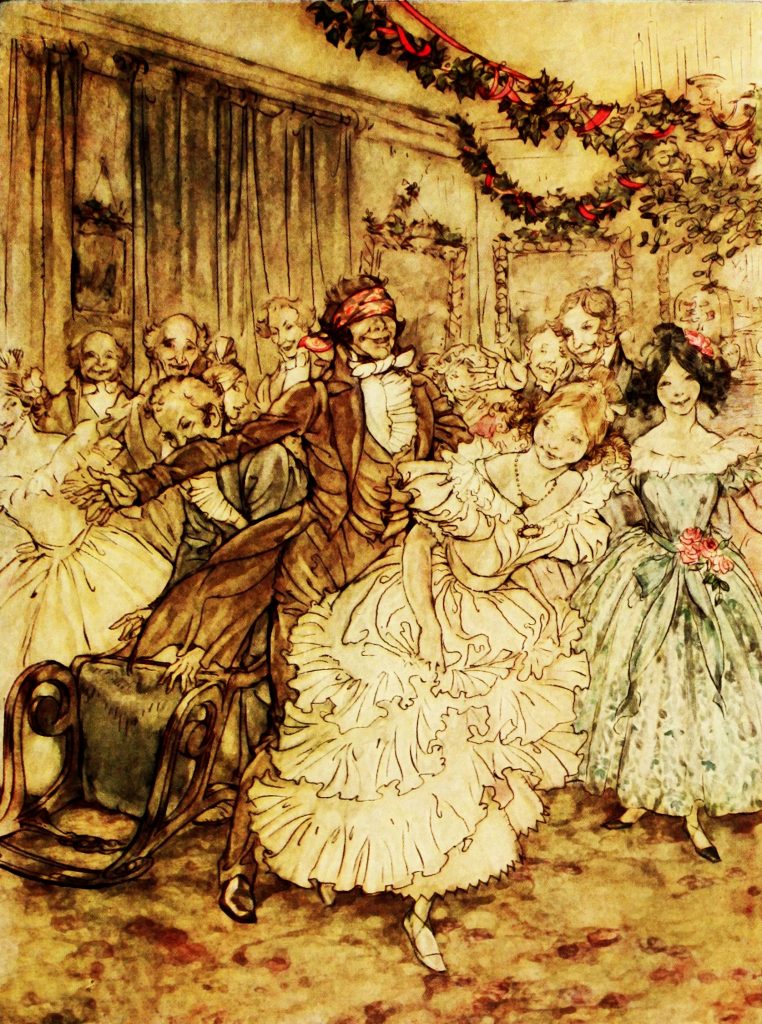 The turning away of Christmas that marked this Georgian era (pre-Victorian) would not last forever, though, and one of the catalysts for change was the publication of Dickens’ A Christmas Carol in 1843.  Fifteen thousand copies were sold, and for the next several years he released new seasonal stories on an annual basis until 1848.  He made an effort to get his colleagues to join in this literary effort of celebrating Christmas, and the revival of Christmastime as a distinct season of the year was underway.  Dickens certainly must have tapped a vein in the English heart that desired this new sense of Christmas, for others soon joined in trying to capture the Christmas Spirit.  In 1846, Punch wrote, “The Literature of England promises, or rather threatens, to be inundated this year with a flood of Christmas Books.  Every little author is preparing a five-shilling volume in imitation of the Christmas Carol.”

Another Christmas tradition that goes back to the Victorians is the Christmas tree.  Although it traces its origins back to Germany, it was not until after its arrival in Windsor Castle in 1841 that it became popularized in England.  Queen Victoria wrote about her children who were “full of happy wonder at the German Christmas tree,” and in 1851, Dickens mentioned “that pretty Germany toy, a Christmas tree,” both references of which suggest the relative newness of this cherished ornament to England.  In 1848, a picture of the royal couple, celebrating Christmas with their children by the Christmas tree, was published in Britain and the United States.  A new cultural tradition was born.

So we do owe a lot of credit to the Victorians for helping establish Christmas as we know it today.  How many of us regularly participate in those traditions that were established during that long reign of Queen Victoria without even knowing where they came from?

What’s in a sugar plum, anyway? 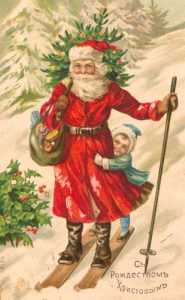 And lastly, on a related note, a well-known food from the Victorian era is the sugarplum, which regularly makes a reappearance in our Christmastime consciousness when we hear Tchaikovsky’s Nut Cracker Suite.  Have you ever wondered what a sugarplum is?  It’s really quite simple: a mixture of chopped figs, apricots, nut meats, and dates, along with some brandy and powdered sugar.  Then, they are rolled into balls and coated with more powdered sugar.

Note – sources for information in this article have been included where possible, but some of the sources have been lost and are not included.