The late Neolithic age may be lumped in with the ancient Greek world in some circles, but it goes without saying that they shouldn’t be.  The major historical divide – between prehistory and history – occurred around 3200 B.C. with the invention of writing, and we can also throw in the use of new metals such as bronze and then iron to distinguish periods on the timeline.  If we look at late Neolithic civilizations and later Greek civilizations (post Aegean age), we really shouldn’t expect many similarities when examining artifacts on the micro level.  At least, that’s what I would expect.

With that said, it occurred to me that there is a little too much in common between certain works of Neolithic Mesopotamian (Proto-Elamite) pottery and Greek Geometric pottery.  Take the work on the left, for example.  This beaker from Susa, Iran (c. 4000 B.C.) is a beautiful example of Neolithic art.  Painted on a simple vessel, it shows a highly abstracted (dare I say “modern”?) ibex (goat with horns) seen from the side in the central register.  We see no color variations, no shading – simply blocks of pigment forming shapes.  No doubt this was due to the limitations of the medium the artist was working with when this beaker was made.

Depicted using a composite view, we can see both horns create a massive circle that surrounds a smaller of square-in-circle design.  The body of the ibex is reduced to a whimsical “pinched” shape in which both body and legs form a visual unity.  The underside of the animal forms an almost perfect arch, and the top of its body almost mirrors it.  The head of the animal and the tail are the only other identifiable components, though these have almost been tacked on later to help us make sense of this shape.

On the top register is a series of birds, lined up one after the other.  Seen from a distance, these look less like birds and more like uneventful vertical lines forming a decorative pattern, but it is still possible to see the small diagonal marks near the top (indicating their heads) and the small diagonal marks near the bottom of the register (indicating their bodies).  The birds’ excessively long necks are a creative way of expressing something that we might otherwise not think much of; here, the artists has turned it into a mesmerizing pattern.  What an interesting design for a Neolithic work!

Now what I find curious is that if we fast forward a little over 3000 years, we can find an oddly similar approach to the design of Greek Geometric period vase painting.  On the right is a Greek vessel known as the Hirschfeld Krater or the Dipylon Krater.  The large krater, dating to about 750 B.C., shows a series of horizontal bands and meander patterns that wrap around from top to bottom, interrupted by a few registers that show funerary scenes with humans and animals.  Like the Susa beaker, the Dipylon Krater has been painted without color variations and without shading.  Again, this is likely due to the limitations of the techniques available to the artists at the time. 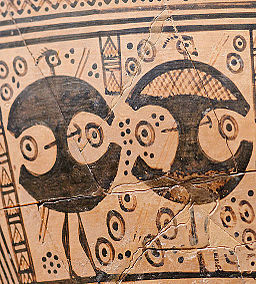 If we look at the details of the Dipylon Krater, we can see a very similar approach to the subject matter as was done by the Susa artist.  We find figures painted very abstractly: simplified, condensed, exaggerated.  A prevalence of geometric shapes (from which comes the name of the historical period in Greek art).  Shields form perfect circles, as do the sections cut out of the shields.  Circular decorations and dots blanket the empty spaces of the background.  While no horned animals are visibly present, the horses pulling the chariot form an almost decorative pattern with their parallel legs lined up in a way to provide a sense of depth.  The humans in the scene have also been reduced so much that their heads are shaped like oblong circles with single dots in the center, presumably suggesting eyes. 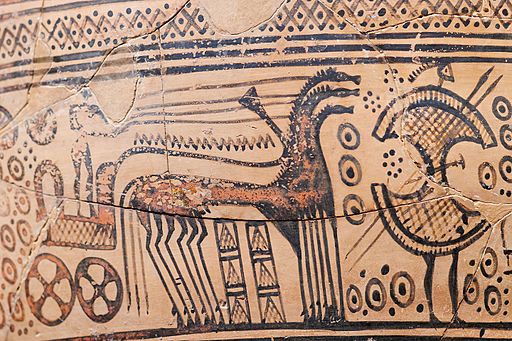 I have admittedly not done much research into the nature of Greek Geometric period vase painting, so I do not know if there was any historical connection to Neolithic Susa that would account for the similarities in style.  However, I would imagine that this would not be the case due primarily to the chronological divide between the timelines of the civilizations.  I think that the stylistic similarities between the two could potentially be attributed to the media the artists were using (not conducive to variations in value or an abundance of detail), and also the limitations in knowledge of perspective at the time.  Nevertheless, there are similarities that go beyond this that are rather curious to me, such as the focus on geometric shapes and the abstraction.

So, with that said, I ask others – are any similarities here remarkable or is this a case of reading too much into things that can be easily explained?