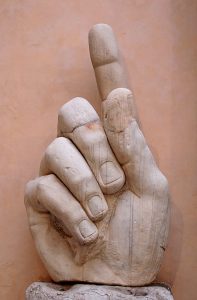 In the 320s, the Roman emperor Constantine made the critical decision to create his new capital in the East.  The new capital, Constantinople, came to occupy the site of an old Greek town and would forever be changed by the emperor’s choice.

According to Richard Krautheimer, the reason he made the move was (at least in part) in order to create a new, Christian capital – one which was free from the attachments of old, entrenched pagan families who occupied the city of Rome.  During the early years of his reign, Constantine respected pagan sensibilities by building the Christian churches of St. John Lateran and Old St. Peter’s in the far reaches of the city, away from the more visible spaces that were closer to the Palatine, Viminal, Esquiline, and Caelian Hills.  This was not enough, though, as Krautheimer suspects the tension between the old and new religion helped lead Constantine to search for his new capital in the East.

What would have happened if Constantine never moved to Constantinople?

We know the aftermath of Constantine’s crucial decision: a permanent shift in power to the Eastern Roman Empire, a sustained Christian presence in the eastern Mediterranean which would provide a bulwark for Europe for over a millennium, and the development of a rich Byzantine cultural tradition.  There is little doubt that this move served Rome well (the empire moreso than the city), but it still leaves a tempting question: what would have happened to Rome had Constantine (and his successors) never left?

Let’s speculate with some generalities.

Civil unrest in Rome throughout the fourth century

The decline in population that the empire suffered beginning in the third century and the growing threats from barbarians to the north in the fourth century would have made Rome a turbulent place to live.  Constantine’s Christianity would have continued to ruffle feathers with the pagan elites of the time, and this could have ballooned into ongoing civil problems.  We already know that Constantine faced opposition from other Romans prior to his move to Constantinople, and if he never made the move there we can imagine this opposition would have worsened.  Eventually this unrest could have subsided, but likely under authoritarian rule by the governing emperors who succeeded Constantine.  Nevertheless….

The simple presence of imperial power in Italy would have served to prolong the power of Rome.  Yes, the borders would have been in disarray, and the empire would have shrunk to a fraction of its size under Trajan, but the heart of the empire would have remained intact for a longer period of time.  Rome would not have been sacked in 410 A.D.  I think the Roman Empire would have continued into the sixth century at least because Rome wouldn’t have suffered the kind of population bleed that it did in late antiquity.  As Krautheimer mentions, Rome’s population took a nosedive in the fifth century, falling from a population of 800,000 to only 100,000.  There’s no doubt much of the population collapse was due to the collapse of the Roman system of government in and around the city after the influx of barbarian invaders.  Had Constantine (and his successors) planned out a strategic vision for preserving Rome at all costs, barbarians might have been repelled and the population spared its demise.  A larger fifth century population would then have propelled successes into the future, leaving barbarian groups at the gates somewhere near the Alps.

I think it goes without saying that the Byzantine Empire served as Europe’s guardian against Muslim invasion in the early medieval period.  Without a Byzantine presence, Islamic expansion could have continued through Anatolia and into eastern Europe, advancing possibly until facing resistance from the Slavs or some other group in the area.  Because of this, Islamic expansion through western North Africa would have been weaker and expansion into Spain might never have materialized.

The religious makeup of the Mediterranean would have been vastly different

One of the likely reasons why Constantine moved to Constantinople was that the eastern region of the empire was home to a greater number of Christians.  Christianity grew out of cities such as Jerusalem, Damascus, Ephesus, and Antioch, and these kinds of places could support the emperor’s building and policy decisions.  But without an imperial presence in the east to protect against Islamic expansion, what would become of these Christians in the east?  It’s hard to say.  Would all traces of Christianity be wiped out?  Would the push of Muslim forces to the west of Constantinople create a weakened, diluted Islam that would falter over time?  And if Muslim forces never crossed the Strait of Gibraltar, would the Iberian Peninsula have developed as a relatively remote center of Christian learning and art?  Whatever the case, there’s a good chance that the religious development of the Mediterranean would have developed very differently than it did.

Barbarian groups to the north would have coalesced to some degree since by the sixth or seventh century the Roman Empire’s borders would have vastly shrunk.  If the Roman Empire managed to survive into the eighth century, the Frankish kingdom would still have existed but would have not extended to Carolingians.  Other groups that entered Italy, such as the Ostrogoths and the Lombards, might have remained in the eastern part of Europe or migrated westward toward southern France.

This one is purely speculative, but if the Franks’ territory was centered exclusively around northern Europe, they may have been able to respond with greater swiftness and vigor to threats from the north.  As Viking raids on England were taking place and then moving on to continental Europe, the Franks would have had more incentive to respond and defend their holdings.  When faced with the option to pay the danegald or raise a competent army to fight, the Franks may have chosen the latter.  Charlemagne or Charles the Fat may even launched attacks on Scandinavia to take out the Vikings in their home towns in response to Viking attacks on monasteries or Frankish towns.  I’m not sure how this would have ended, but one possibility is that the Vikings as we know them could have been reduced to a group of blond-haired farmers rather than warrior raiders.

A decision that changed history

It’s reasonable to conclude that Constantine’s decision to move to Constantinople was one that would reverberate throughout history.  It’s interesting that the effects would not only have changed the area which would later become the Byzantine world, but also throughout western Europe.  Suffice it to say, the cultural and political ramifications of Constantine’s move continue to influence even to this day.

I came across some commentary and reactions that were posted in regard to a study of Viking burial sites which had included information about the gender of the deceased.  Without citing the actual text of the study, here is some of the reaction (via Invasion of the Viking women unearthed):

So much for Hagar the Horrible, with his stay-at-home wife, Helga. Viking women may have equaled men moving to England in medieval invasions, suggests a look at ancient burials.

The author presents a conclusion which seems commonplace today in the sense that it shatters our stereotypes about what we thought we knew about medieval women.  This sentiment was then echoed by more recent commentary on the supposedly myth-busting find (via Better Identification of Viking Corpses Reveals: Half of the Warriors Were Female):

It’s been so difficult for people to envision women’s historical contributions as solely getting married and dying in childbirth, but you can’t argue with numbers—and fifty/fifty is pretty **** good. The presence of female warriors also has researchers now wondering just how accurate the stereotypes of raping and pillaging actually are…

This second conclusion has us imagining wild Viking battles in which every other warrior rampaging through Carolingian villages is a long blond maiden-fighter named Helga or Olga.  It’s backed up, supposedly, by archaeological evidence.  Right?

Not so fast.  One of the comments to that same article was left by a historian (“Andrew”) who just so happens to study early medieval burial sites (in other words, an expert on the topic).  According to Andrew, the conclusion about the 50/50 gender split on the battlefield is simply not a correct one to be made, and that “…while many women have been found buried with weapons, the evidence doesn’t support the claim made in the title of equal gender representation on the battlefield.”  The underlying rationale behind the women-on-the-battlefield theory is that warriors were typically buried with weapons, and archaeological evidence indicates that some of those with weapons are the remains of deceased females.

Andrew goes on to say that the actual rate of graves containing females with weapons is under 10%, and even that percentage might not accurately reflect how many women saw the battlefield (i.e. simply being buried with a weapon does not automatically mean that the deceased was a warrior).  His conclusion:

Archaeologists who ignored evidence that Viking women weren’t all housewives caused great harm, but going to the other side and saying that men and women were equal on the Viking battlefield isn’t really any better. It minimizes the reality of gender inequality that Viking women had to struggle against, much like the inequality faced by their modern counterparts.

Good advice, except for the curious conclusion in the last sentence, which seems to violate at least the sentiment of avoiding unfair conclusions that he had been advocating.  Did Viking men and women share the same roles?  Did they have the same responsibilities, or enjoy the same benefits as the opposite sex?  Certainly not, but using a loaded, modern term such as “gender inequality” inserts biased socio-politically-motivated language into a discussion which up to that point had been about archaeology.

Personally, I thought that it was interesting to see the display of cause and effect in regard to archaeological findings, even if the effect caused some erroneous conclusions to be made.  It doesn’t really matter to me how many Viking women were on the battlefield, but it does make more intuitive sense that the percentage would have been quite low.  Quite understandably, men would have been more valued for their physical prowess in war, and women would have been more valued for their gifts of childbearing and home life.  This isn’t to say that this was absolute, but just a general rule.  As unfashionable it may seem these days, it’s far wiser to get one’s knowledge by learning the general rules about how the world works (or worked in history) than it is to be educated in a thousand exceptions.